Get A Free No Obligation Quote Today!

We like to think of ourselves as the Premier Decorative Concrete experts. We pride ourselves on being the best there is! The flooring areas around your home are important to the look and feel of your entire house, then your patio starts to look dated and unsafe it affects the way you enjoy your outdoor area, which is why it is important to have it looking fresh, safe and inviting for you, your family and your friends. A stamped concrete patio is an excellent addition to your home, providing you with a unique and impressive surface that's quick and affordable to install. 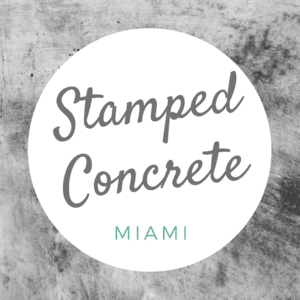 Premier Decorative Concrete is a contracting service that specializes in residential and commercial flooring products like stamped concrete, decorative concrete, and concrete installation. We have established ourselves over many years as the leading service in Miami, we strive to provide the absolute best service and quality of the finished product for our customers that time after time leaves our customers wowed by the standard of our work. 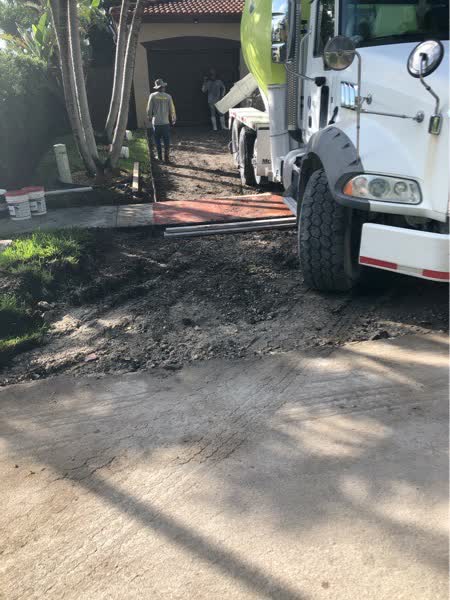 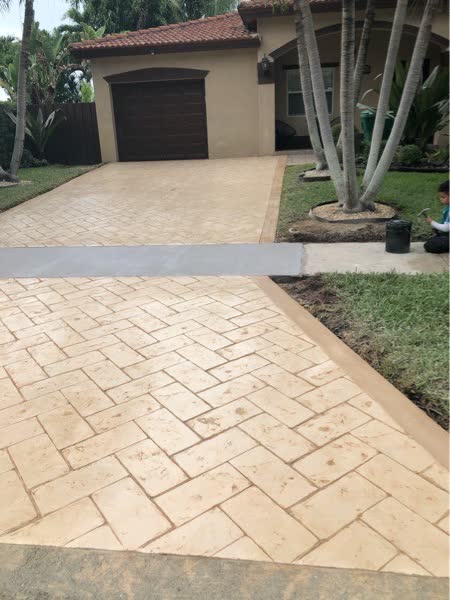 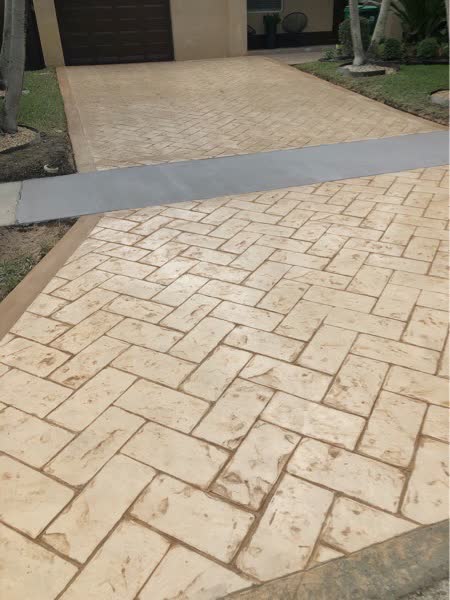 The services we have on offer are the result of years of development with our customers, learning what they want and developing our skills to suit their needs. Our team has worked hard to be the best at creating decorative and artistic concrete projects, along with restoring and polishing existing concrete into beautiful flooring. We're confident that whatever your need is in your home or office, we have a service that can suit you, take a look at everything we have on offer and see how we can help provide you with a great looking stamped concrete driveway or concrete pool decking.

Concrete is a great building material to use throughout your home, but on its own can look a bit plain and boring. Stamping is the process of pressing a pattern into the concrete as it sets to bring an interesting look to it, giving it a more interesting look than just standard poured concrete. We have a huge range of different stamps available to apply an interesting pattern to your next concrete project, we even have patterns that look like other building materials such as stone, tile or brick so that you can achieve the same look as those materials while still enjoying the benefit of concretes affordability, strength, and quick installation.

Driveways are the first thing that people see when they are approaching your home. Don't you want it to stand out and be a work of art? We like to think that it should be something of beauty and recognition. Stamped concrete is a versatile and unique option that will ensure your driveway is the talk of the town. Our experience and professional knowledge will ensure that you get the highest possible service and installation. We take the care necessary to make sure that your driveway looks and feels unique and durable. We want your concrete to last a lifetime.

A smooth, stylish pool deck helps you make the most of the pool outside your home that brings so much joy to you and your family on those beautiful Florida afternoons. If your decking is starting to deteriorate and need an update, or you are tired of the grass you have there now, our team can come and install a new one. Using our stamping or polishing techniques, we can give you a great looking deck that makes your pool come alive.

Installing concrete in Miami, Florida is a job best left to the professionals. We can demolish an existing surface or install a fresh surface on top of grass or dirt. We make sure that your concrete installation is prepped properly as to prevent cracking or structural damage. We also make sure to take the time necessary to make sure the area is fully prepped before we do any pouring of concrete. In Miami, we always make sure things are done right! 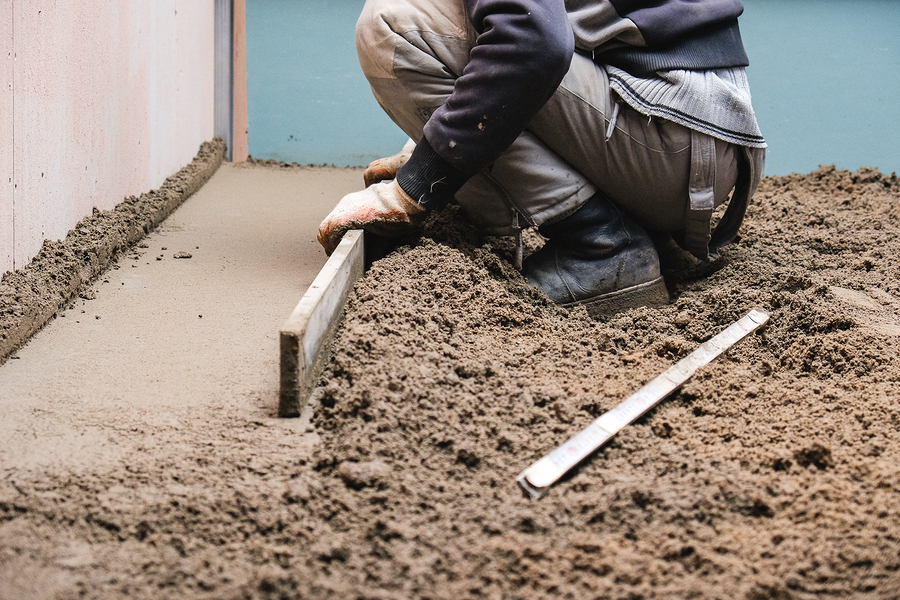 When you have an outdoor area that needs a new flooring solution, concrete is a great option to give you a stylish look that you can customize to suit the look of your home. Our professionals can pour all kinds of concrete styles, from broom finish gray to terra-cotta stamped flagstone. Concrete can be used in a range of different ways in your home, from patios to paths running through your garden, whatever your need we can help find and install the right concrete for your project.

Driveways need to be tough to handle cars driving over them constantly, there's no material better suited to the job than concrete and when you pair it with our stamping service you're getting a stylish solution that is still affordable and quick to install. We can work with you to find the concrete driveway design that suits you best, so you can be proud of the entrance to your home.

"I needed a concrete contractor to put a new concrete patio in our yard, I found Premier Decorative Concrete and spoke to their team and they came out to pour the concrete the next day. I was amazed at how simple they made it look, and the result speaks for itself, I couldn't be happy with my new concrete patio." – Taylor P.

"Our pool deck had seen better days from too many years of use, it was looking outdated too so it was time to have it ripped out and re-poured. A friend recommended Premier Decorative Concrete who came to pour new concreting around the pool. They suggested some stamped concrete and now it looks fantastic!" – Vanessa J.

"My driveway was starting to crack and fall apart so I decided to get a professional in to replace it, I searched for concrete services near me and came across Premier Decorative Concrete. I was extremely impressed with their service, they helped me pick the driveway I wanted and had it poured in no time, very happy with the final result." – Luke S.

Felicia Cook
This expert concrete team did a fantastic job installing our new concrete sidewalk. They were very professional, fast-working, efficient - everything you could want in an installer! We will definitely be using them again when it's time for us redo the rest of our driveway too!
Clark Lawrence
We finally got our walkway and driveway fixed! The whole process was great, from scheduling to the final product. We had an old gravel driveway that needed some work done - it looked outdated and wasn't very appealing anymore because of all the cracks. We spent weeks deciding on a contractor and we are glad we went with this one. Very responsive and knowledgeable about the trade. Thanks for a job well done!
Viviana Benitez
From the first call to the end of the job the service and knowledge was perfection. Very happy we went with this company.
Ricard Hensman
Great company to work with! The guys did an amazing job and worked so hard to get my driveway done in one day. They came out and finished the whole job just days after I called them for an estimate, which I am so thankful for. They were extremely professional and went above and beyond. I highly recommend them!
Eduardo Torres
Very professional company. Showed up on time and did an excellent job. They made an alteration to my driveway, then pressure cleaned and painted it. I was very pleased with the end result and the price was fair.
Angela Messam
Working with Olbin Fuentes was an excellent experience. They knew exactly what I needed as a general contractor to satisfy my client. Looking forward to working with you guys on the next project! Angela Messam, CGC
Google rating score: 4.7 of 5, based on 17 reviews 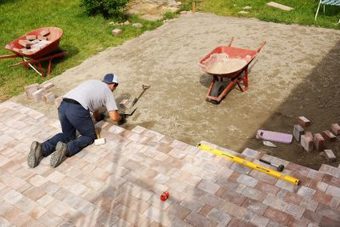 If you have an upcoming project that involves any of the services our company offers, make sure you get in touch with us so we can help you to get the quality final product you deserve. You will find our contact number and email form on our contact page that you can use to get in touch with our consultants who will walk you through every step of the way. And we have been fortunate enough to team up with other contractors in the US. Check out our sister concrete contractor Santa Fe residents can trust!

Because there are so many stamped concrete designs to choose from, we would rather show you in person. Along with a free consultation, we will also provide you visuals of your dream concrete patio or driveway. With so many patterns and colors to choose from, we could never do it justice by putting them all here. Also, every home looks different, so we would rather show you how the colors or patters would look with the rest of your home. The whole process is so personal and we make sure to walk you through it every step of the way.

Miami, officially the City of Miami, is a coastal metropolis located in Miami-Dade County in southeastern Florida (United States). With a population of 467,963 as of the 2020 census, it is the second-most populous city in Florida, eleventh-most populous city in the Southeast, and 44th-most populous city in the United States. Miami is the core of the nation's eighth-largest metropolitan area with 6,138,333 people. The city has the third-largest skyline in the U.S. with over 300 high-rises, 58 of which exceed 491 ft (150 m).Miami is a major center and leader in finance, commerce, culture, arts, and international trade. The metro area is by far the largest urban economy in Florida and the 12th largest in the United States, with a GDP of $344.9 billion as of 2017. In 2020, Miami was classified as a Beta + level global city by the GaWC. In 2019, Miami ranked seventh in the United States and 31st among global cities in business activity, human capital, information exchange, cultural experience, and political engagement. According to a 2018 UBS study of 77 world cities, the city was ranked as the third-richest in the world and the second-richest in the United States in purchasing power. Miami is one of the largest majority-minority cities in the United States and the fourth-largest majority-Hispanic city in the United States, with 70.2% of its population being Hispanic in 2020.Greater Downtown Miami has one of the largest concentrations of international banks in the United States, and is home to many large national and international companies. The Health District, home to Jackson Memorial Hospital and the Leonard M. Miller School of Medicine at the University of Miami and others, is a major center for hospitals, clinics, and the biotechnology and medical research industries. PortMiami is the busiest cruise port in the world in both passenger traffic and cruise lines, and refers to itself as the "Cruise Capital of the World".

Map of Miami Expand
Directions to Us Expand